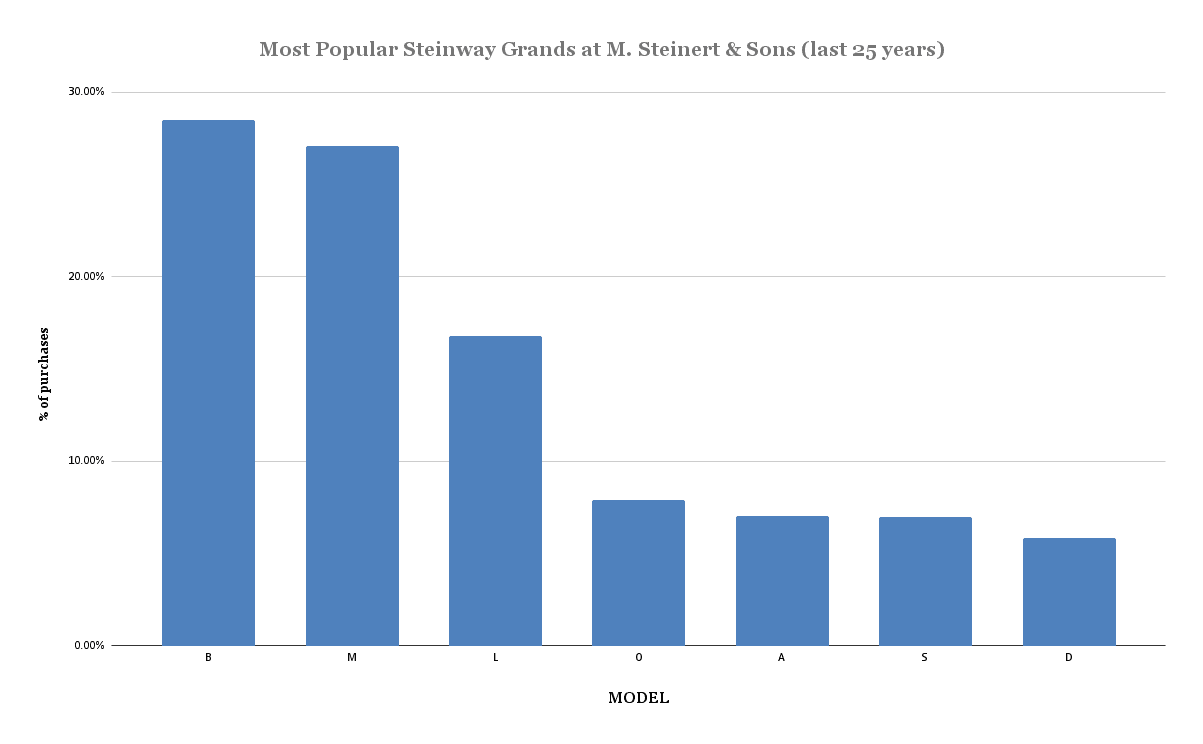 You’re ready to start shopping seriously for a Steinway piano, but you want to take your time, do it right.  After all, who wants to make this size of an investment, only to find that it doesn’t quite suit your needs in your home?

The piano consultants at M. Steinert are very experienced at helping customers with a wide variety of considerations, both in terms of their level of playing and the size of the space where the piano will be placed.

Since 1860, M. Steinert & Sons has gone the extra mile to ensure that each customer will have long-term satisfaction with their new Steinway piano.  We enjoy seeing people bringing the Steinway sound to their home or performing venue.

Towards that end, for your consideration, we offer you a look at the most popular Steinway models at M. Steinert.   You may find others’ preferences mirror some of your own.

By reviewing the Steinway models that have proven so popular with our customers over the years, you can start to narrow down your options as you move towards a final selection that is best for you.

The Top Six most popular Steinway pianos (according to our customers)

In a close race, the famed 7’ Steinway Model B edges out the 5’7” Model M as the most popular Steinway grand among M. Steinert & Sons’ customers.

The Model B is the choice of 28.46% of M. Steinert’s customers.  M. Steinert piano consultant Patrick Elisha notes that a major reason for the popularity of both the B and the M is that they are the models used for Steinway’s Spirio player pianos.

The 7’ Model B is Steinway’s best-selling model and has been acclaimed for having the top Steinway sound and touch outside of the concert grand models. The Model B is well-known for its constantly refined tone, touch sensitivity, broader dynamic range, longer sustain, and nuanced color.

Most Steinway Artists own Model Bs or Model Ds–or both. The Model B is not too large for many living rooms yet is also large enough to be appropriate for a smaller concert hall or a church sanctuary.

It is the most versatile of the Steinway grands. It is often the choice of serious amateurs or professional pianists who do not have the budget or the room for a 9’ concert grand Model D.

To learn more, read our Review of the Model B.

Introduced in 1911, the Steinway Model M occupies a cherished place for many in the Steinway spectrum of grand pianos.  At 5’7”, the Model M is situated between the smaller (5’1”) Model S and the larger (5’10”) Model O.

Steinway has called the M their “Studio Grand.”  It is the choice of 27.07% of M. Steinert customers.

Though smaller than other models like the O and the A, the Model M still retains a sound that richly fills a home or small venue without being overwhelming.  This is due to its Steinway soundboard.  Its responsive action produces a touch that can engage any style of music.

Because of its more compact size as Steinway’s “Studio Grand,” the Model M has proven itself as a consistent favorite for those needing a somewhat smaller grand piano for the home or small venue.

To learn more, read our Review of the Steinway Model M.

While Steinway’s Model L comes in next as the choice of 16.76% of M. Steinert’s customers, the L has been replaced in recent years with the Model O, which has been the selection of 7.91% for a total of 24.67% for both of these 6’ grands.

The Steinway Model O, referred to as the “Living Room Grand,” is the largest of the smaller Steinway grand pianos with a length of nearly 5’11”.

Patrick Elisha notes that the Model O’s size begins to usher in the full, rich sound of the larger Steinway grand piano experience.

The Model O offers a full, resonant sound of exceptional warmth and depth.  Often used for homes and teaching, the Model O has a rich bass register that is bolstered by the ample string length and the patented Diaphragmatic Soundboard.

The Astoria, New York Steinway factory had historically produced the Model L, while Steinway’s Hamburg, Germany plant made the Model O.  Over time, a consensus emerged between these two Steinway divisions that the scale design of the O was preferred.

As a result, the decision was made to select just one nearly 6 foot piano to bear the Steinway name. The O had won on its merits.

To learn more, read our Review of the Steinway Model O

#4. Steinway Model A: The game changer

For many, Steinway’s Model A, known as the “Parlor Grand,” is the perfect piano. It is a close cousin to the better-known Model B,  known as the “Living Room Grand.” 7.91% of M. Steinert customers chose the Model A.

This difference in length makes the Model A an easier fit in many homes than the Model B.  However, the Model A is still long enough to accommodate those looking for a full Steinway grand that provides a concert-quality Steinway sound despite the smaller size.

The early Model A featured some of C.F. Theodore Steinway’s innovations, secured by several patents. As a result, the Model A is seen as Steinway’s game changer.

To learn more, read our Review of the Steinway Model A

The Steinway Model S is a well-conceived piano that conveys the famous Steinway sound despite its small scale design.  At 5’1” (155 cm), the Model S is the smallest of the Steinway grands. The first ones were made in mahogany.

According to M. Steinert & Sons President Emeritus Paul Murphy, to compete with smaller and less expensive pianos built by Steinway’s competition, the S was introduced in 1936 at $885.

Steinway’s Model S is not for everyone.  A professional concert pianist will want to have a Model B or D, which will allow them a wider dynamic range due to their larger size.

However, if you want the Steinway sound but have real space considerations, the Model S can be the perfect fit for their home or small venue.  The S is a special order piano from Steinway, only a little smaller than the Model M.

For more information, read our Review of Steinway’s Model S

Usually used only by professional pianists or concert venues, Steinway’s Model D is one of the most recognized grand pianos in the world.  5.82% of M. Steinert’s customers selected the D, with many of them going to performance facilities or institutions of higher education.

Over the years, the nearly 9’ Model D and other Steinway grands have possessed a strong bass to go along with their broad tone and a timbre some have called “spine-tingling.”  The sheer power in a Model D allows it to project to the back of any concert hall.

This sophisticated action is the reason so many professional pianists prefer the Model D: they feel at one with the instrument and believe that its range of tone and color brings out their musical best.

A quite popular model for institutions of higher education and symphonies, the Model D is the official piano of hundreds of musical venues, including the Boston Symphony Orchestra,  Juilliard, and the New England Conservatory.

Over 200 colleges and universities are officially designated as All-Steinway Schools, with the Model D taking center stage on their campus’s performing arts centers and music departments.

Finally, if you’ve listened to a classical or jazz piano recording lately, chances are that you were listening to a Steinway Model D.

To learn more, read our Review of Steinway’s Model D.

How Much Do Steinway Pianos Cost?

These new Steinway grand pianos range between $75,000 and over $300,000, depending upon style and finish.  M. Steinert & Sons piano consultants can keep you updated on the current price for each model.

Whatever your final choice of a Steinway grand, the good news is: it’s a Steinway.  The legendary quality, craftsmanship, tone, and longevity that has made Steinway famous is in each of their grand piano models.

Come visit one of our two showrooms in Boston and Newton to begin the pleasant process of trying out these Steinway models yourself.

Our experienced piano consultants enjoy learning about your needs and aspirations when it comes to having a piano in your home. They can serve as your guide through the interesting process of choosing a Steinway.