The SPIRIO | r incorporates all the features of the Spirio and adds a revolutionary high-definition capture and playback.  SPIRIO | r stores and plays music and videos directly from the instrument, with immediate response and uninterrupted playback.

First and foremost, SPIRIO | r can be played like any other Steinway, the instrument artists have chosen for over 165 years for its broad palette, warmth and depth of tone, powerful resonance, and unmatched touch response. Much like the megapixel revolution of the digital camera, SPIRIO | r offers exclusive high-resolution recording, preserving all the music: every nuanced dynamic level from infinitesimal gradations of hammer velocity to every shade of resonance from proportional pedaling — now at your fingertips.

The artisans at Steinway & Sons seamlessly install SPIRIO | r technology at the time of manufacture, ensuring no alteration in the musical performance nor compromise in the instrument’s beauty. Native to the Spirio app, the Spirio editor provides the world’s only advanced iPad–based high resolution editing capabilities to Spirio files, allowing users to edit every nuance of their SPIRIO | r recordings.

A look at select artists and schools who have selected Spirio | r as the “perfect marriage of tradition and technology, cause it’s the best of both.” (quote from Dr. Richard Fountain). Model D:  As 8′ 11¾” (274 cm) in length, the SPIRIO | r is available as a majestic Model D, the pinnacle of concert grands and the overwhelming choice of the world’s greatest pianists and for anyone who demands the highest level of musical expression.
Complimentary iPad Pro® included. Model B:  As a Model B, this SPIRIO | r is a magnificent 6′ 11″ (211 cm) grand piano, often referred to as the “perfect piano.” It’s a wonderfully balanced and versatile instrument that does extremely well in intimate settings, teaching studios, and mid-sized venues. Complimentary iPad® included. 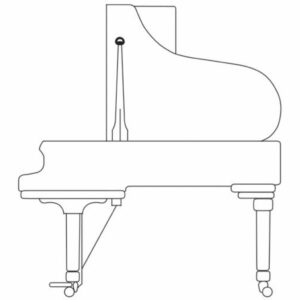 Model M:  The most recent addition to the SPIRIO | r family is the popular Model M. At 5′ 7″ in length, it becomes an option for every home, studio, or office to access Spirio | r technology. Complimentary iPad® included.

Let us connect you with a demonstration of the Spirio at your convenience – please complete the form below.