Home > Resource Center > Comparisons > Steinway vs Bosendorfer: Which is the better piano for me?

Steinway vs Bosendorfer: Which is the better piano for me? 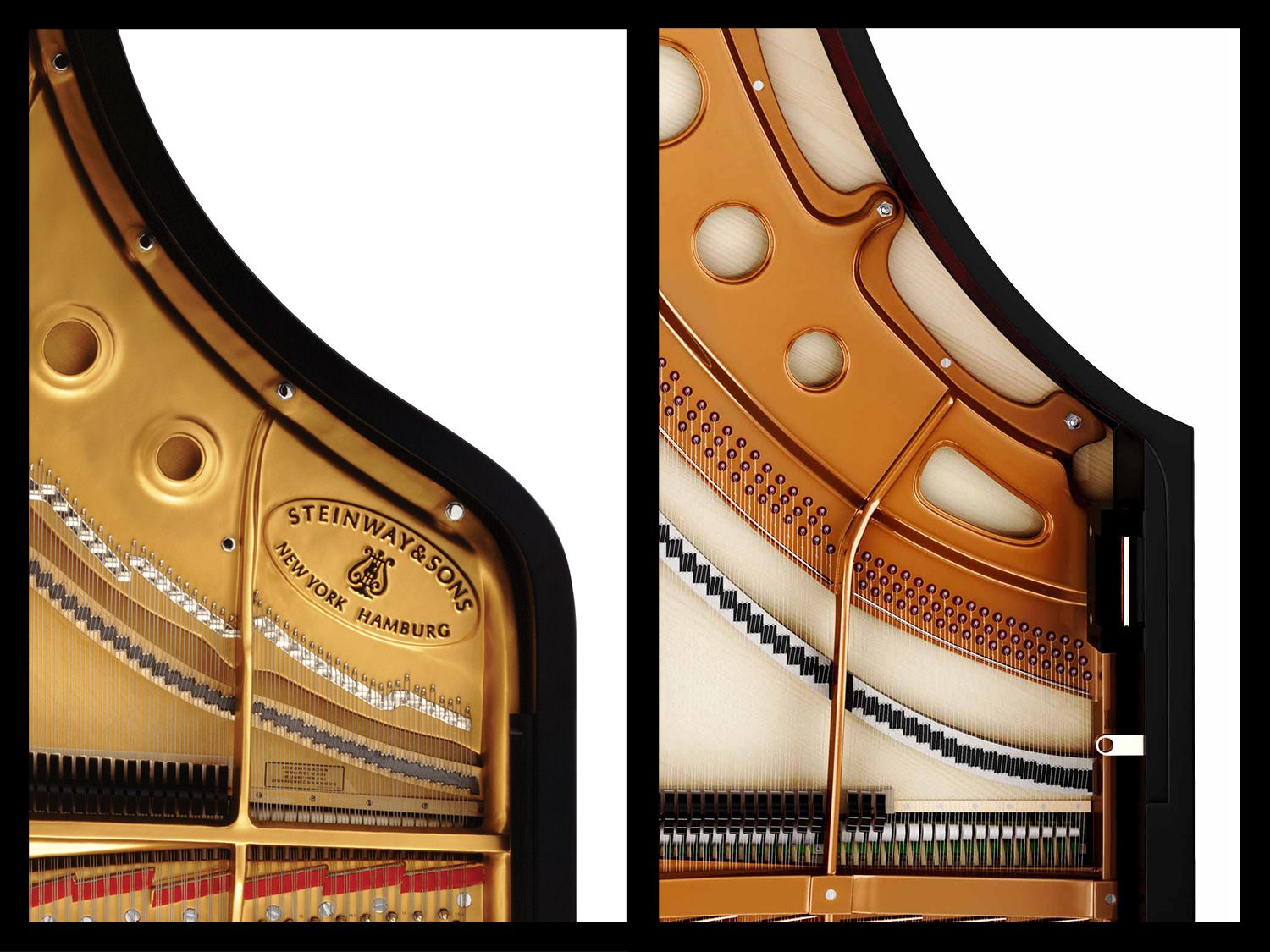 Steinway vs. Bosendorfer: Which is the better piano for me?

At M. Steinert & Sons, we are frequently asked our opinion of other piano brands.  Our salespeople have deep knowledge of the various piano makers building pianos today; indeed, some of our piano consultants have worked for other brands before coming to M. Steinert & Sons.

While we obviously believe strongly in our Steinway & Sons product line, it would be foolhardy to not acknowledge the positives as well as the differences in other piano brands.  We want you to find the best possible piano for you.

Purchasing a piano is a sizable investment, both in terms of time and money.  At the end of your piano buying journey, we hope you are well-informed about your options and can make a decision that you feel good about for years to come.

With that in mind, let’s take a look at two piano brands often compared to one another, despite some significant differences in tone and price:  Bosendorfer vs. Steinway.

Background to the two piano makers

As with German-born Henry Steinway, Austrian Ignaz Bosendorfer was an accomplished instrument maker.  However, Bosendorfer was founded in 1828, twenty-five years earlier than Steinway & Sons, and soon made its mark as the official piano maker to Austria’s emperor.

By the time Steinway had started to make his first pianos in the 1850s, Bosendorfer’s leadership had passed to the second generation, Ignaz’s son, Ludwig Bosendorfer.

Bösendorfer was later sold in 2002 to  BAWAG PSK Gruppe.  Then all of its stock was sold to Yamaha in 2007. The company remains headquartered in Vienna, a fitting tribute to its history and tone.

After a request for additional keys by composer and pianist Ferrucio Busoni, Bosendorfer added extra keys in the bass section to some of its models, such as the Imperial Grand Model 290 (97 keys) and the 225 Model (92 keys).  Other Bosendorfer models conform to the standard 88 keys seen in all of Steinway’s models.

Beyond the novelty of these extra keys, the addition of these extra, thicker strings adds resonance while other strings are played. As a result, the piano’s bass section is considered by many to have a rich, even dark sound.  We’ll touch on Bosendorfer’s treble section later in this piece.

Bösendorfer’s Imperial Grand 290 is one of the largest pianos made.  In all, Bosendorfer makes seven grand piano models and two upright pianos.

After immigrating to America in 1850, German-born Henry Steinway founded Steinway and Sons in New York City in 1853, His self-stated goal was to build the best piano possible through tonal excellence.

In addition to pursuing excellence in musical craftsmanship, Steinway & Sons sought to establish itself as a truly American company.  The Steinways pursued popular acclaim by creating Steinway Hall, a top concert venue in New York City for piano performers.

Moreover, Steinway celebrated those top piano performers by creating the designation of “Steinway Artists” and “Steinway Immortals.”  These were pianists who, despite no compensation, stated that Steinway pianos were their preference.

Interestingly, both Bosendorfer and Steinway lay claim to a share of Franz Liszt and Anton Rubinstein, both of whom had positive comments about Bosendorfer but who ultimately became Steinway Artists.

Steinway’s bell-like tone and even keyboard have propelled it into a dominant position among performing piano artists around the world, 90% of whom say that they prefer to play a Steinway.

Both Bosendorfer and Steinway use spruce wood in the interior of their pianos, though Steinway specifically uses Sitka Spruce for its trademark soundboard.  The soundboard, along with the Hard Rock Maple case, helps to produce a rich sound that projects well in concert halls around the globe.

The differences above and below Middle C

When comparing Steinways and Bosendorfers, a bit of piano history is worth knowing.  By the time Mozart, Haydn, and Beethoven were experimenting with the piano, the instrument had been around for two to three generations.

Though the differences between these two approaches are subtle today, Steinway follows the American school of design, while Bosendorfer is more aligned with the Viennese school.  So what is the difference between the two schools?

To hear piano commentators talk, one could deduce that the difference between these two schools and two brands is in the treble and bass registers.

Steinway’s tone: Round and mellow

Steinway is credited with having a “round” and mellow sound in the upper keys, in part due to its lower string tension, exceptional Sitka spruce soundboard, and a bent grand frame made of Hard Rock Maple.

All of this helps produce more audible harmonics for a rich, complex sound with great projection. Many have called Steinway’s upper register tone warm and bell-like.

In contrast, Bosendorfer, following the Viennese school, makes the inner rim of solid Bavarian spruce blocks, using a technique similar to that of a bricklayer building a brick wall.  The outer rim is made of solid spruce, shaped by cutting narrow slots are filled with spruce shims.

As a result, the outer rim of a Bosendorfer is thinner than most pianos, and their inner and outer rims interface directly with the soundboard.

Thus, the entire case becomes an extension of the soundboard. The result is a more classical-era, 18th Century sound.   It can be reminiscent of a harpsichord.

In the upper registers, fans of Bosendorfer call this a pure, crystalline sound, while detractors find that it sounds tinny or even like “shattered glass.”

However, Bosendorfer gets higher marks for powerful keys on the lower end of Middle C.  Also, for those who like a particularly fast action, Bosendorfer has that, too.

Have North American concert pianists even played a Bosendorfer?

Some advocates for Bosendorfer note that a North American professional pianist might have difficulty having exposure to any European brands like Bosendorfer as Steinway dominates the concert market here.

However, that minimizes Steinway’s hardwon reputation as the choice of over 90% of concert pianists.   Such pianists, at the top of their musical profession, have likely played several different European brands, including Bosendorfer.

Yet the vast majority of them still prefer Steinway, while acknowledging Bosendorfer’s strengths.

Prices for Steinways and Bosendorfers

North American piano buyers often associate Steinways as the highest-priced pianos on the market.  However, that is likely because Steinway is the best-known premium piano to them.

However, compared to some European brands, including Bosendorfer, Steinway is far from being the most expensive premium piano brand.

For a brand that was once owned by Kimball, Bosendorfer has certainly come of age. Meanwhile, Steinway can enjoy the fact that their pianos, considered the standard in the industry, are not the most costly at all.

Both piano brands are intriguing–but one is more versatile

The difference is in the design and the woods used

Both Bosendorfer and Steinway have beautiful cases, elegant with impressive finishes and exteriors.   What truly distinguishes Bosendorfer from other piano brands is its unique design that is not used by any other piano company.

Specifically, the Bosendorfer has a jointed rim comprised of vertical slats of spruce–the same softwood used in other piano soundboards, including Steinway-designed brands like Boston.   The theory here is that the entire piano should resonate like a violin.

However, violins are not made only of spruce–they have a hard maple back and a soft spruce top, which is similar to Steinway-designed pianos like Boston with a hard rock maple inner rim bent to make a much stronger rim as compared to the Bosendorfer’s softer rim.

The resulting sound in both pianos

The sound in the Steinway-designed spruce soundboard bounces off the dense Hard Rock Maple rims to the ear with greater power, clarity, sustain, minimal dynamic distortion, and more overtones.

Conversely, the sound in the Bosendorfer spruce soundboard is absorbed by the soft spruce rim of the Bosendorfer and, under pressure (as in a fortissimo or forte/fortissimo or sforzando), will distort and become unpleasantly percussive, particularly in the upper treble registers of the piano.

Another factor resulting from these structural differences is tuning.  The Bosendorfer spruce rim expands and contracts like the soundboard and moves far more than the hard maple rims of the Steinway. This also affects the holding of concert pitch, especially in an orchestral setting.

A consistent tone and better price makes the difference

The philosophical frameworks of Bosendorfer and Steinway & Sons make for intriguing reading.  Few other piano makers have experimented with the keyboard as much as Bosendorfer has.  Yet Steinway has managed to contribute over 135 patents to make today’s piano what it is.

Steinway’s tone has an evenness throughout that blends well with its complex harmonics.  One could say that Steinway’s even, bell-sounding tone is the glue that holds all of Steinway’s complexity together.

This makes Steinway a quite versatile instrument, good for classical music but also jazz, hip hop, and other contemporary genres.

Contrast that with the Viennese tone found in the Bosendorfer.  Yes, Bosendorfer has a deep bass section.  However, many find the treble section to be a bit too treble and uneven.

For Mozart and other classical composers, this more sharply clear section north of Middle C might seem just right.   However, for other pieces, it can be jarring.

Steinway preferred by most professional pianists

While both piano makers should be applauded for their commitment to creating pianos that double as a work of art, Steinway has become the preferred instrument of over 90 percent of professional pianists the world over for a reason.

While each Steinway is handcrafted and therefore unique on certain levels, they are also consistent, allowing the performer to release their passion on the keys without having to worry about the tone of the instrument.

Finally, the price differential is significant.  A new Bosendorfer is significantly more expensive than a new Steinway, with part of that added expense coming from shipping them here from Vienna.

While Steinway also has a European base of operations in Hamburg, Germany, their Astoria, NY facility services the North American market.

Steinway is better for overall quality

As a result, for overall quality, versatility, and price, Steinway is the best choice for most people and their preferred musical genres.

Come in and see for yourself which Steinway models you would like to try.  In the meantime, you can continue to read more from our Expert Advice section through the links listed below:

Do I need a Steinway if I’m not into classical music?

Can you finance a Steinway piano?

Are any of these Steinway piano myths true?