Home > Resource Center > Learning About Pianos > Steinway Model B Review: Is the B the perfect piano?

Steinway Model B Review: Is the B the perfect piano? 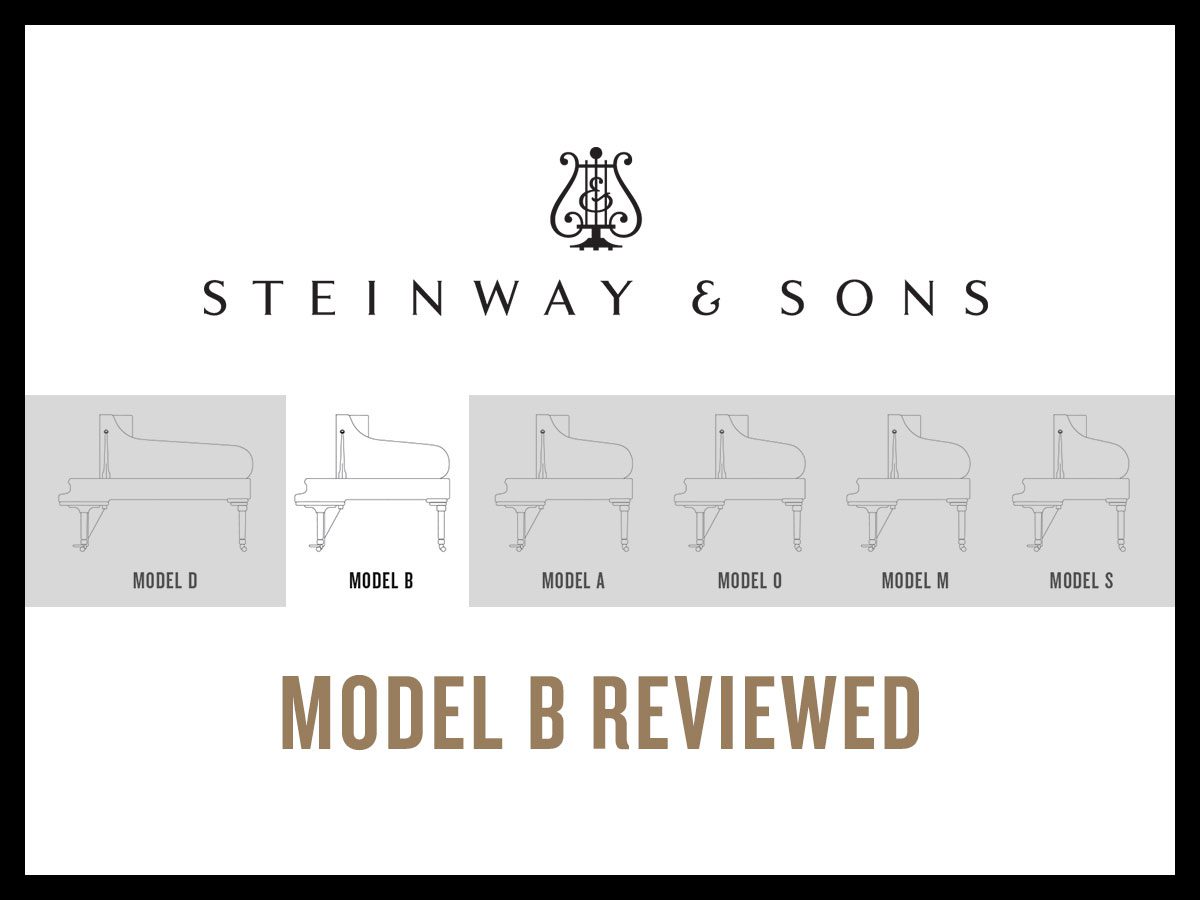 Steinway Model B Review: Is the B the perfect piano?

The Model B is Steinway’s best-selling model and has been acclaimed for having the top Steinway sound and touch outside of the concert grand models. The Model B is well-known for its constantly refined tone, touch sensitivity, broader dynamic range, longer sustain, and nuanced color.

How did the Model B achieve these aspects, becoming the standard against which all 7’ foot grand pianos are measured for the past century?

The fruit of generations of piano engineering

For several hundred years, piano design engineers arrived at a consensus that, regardless of brand, a grand piano in the vicinity of 7’ in length can be considered ideal from a musical perspective.

This is due to the overall acoustic balance of the bass, tenor, and treble registers and how they complement and enhance each other. The bass is rich, distinct, and prolonged without overwhelming the treble. The sustain of the higher octaves as well is noticeably longer, and the harmonic content of the notes more audible and colorful.

Each component helps to create the Model B’s “Steinway sound”

Over a span of 165 years, Steinway & Sons has delved into making each piano part involved in creating the famed “Steinway sound” the best it can be, both in terms of materials and design. The following parts are key to the overall sound of the Model B.

The braces beneath the grand piano establish the structural foundation of the piano, much like the cement foundation of a house and will, in tandem with the cast iron plate above them, perform the primary function of withstanding the 40,000 pounds of string tension within a piano.

To increase the surface square inch volume of the soundboard and thereby increase the overall resonance of the grand piano, Steinway widens the rear or “tail” of its larger grand pianos to accommodate more of a vibrating surface area composed of the resonant spruce wood.

The three largest Steinways (A, B, and D) boast a wide tail design.

All three of Steinway’s larger models feature a cast iron treble bell in the shape of a cone affixed to the rim’s underside.

This bell serves to hold the plate vertically rigid by means of a steel bolt from the nose of the bell to the cast iron plate, preventing vertical flexing of the plate under the enormous string tensions, thereby assisting significantly in tuning stability, especially in the treble registers.

The one-piece continuous bent rim, 2¾” thick, is one of the most significant technical innovations in piano building. The rim provides the foundation for the stability of each Steinway grand piano.

The rim of the Steinway Model B is comprised of 16 layers of Hard Rock Maple, with both inner and outer rim being pressed together in a single operation.  This provides the structural integrity that enables a Steinway piano to endure for generations.

The soundboard lies at the heart of a Steinway piano.  Great care is taken both in the selection of the wood and the soundboard’s design.  To meet the highest quality standards, Steinway uses only superior Sitka spruce with a regular grain and a prescribed number of annual growth rings.

The Steinway Diaphragmatic Soundboard is based on a 1936 patent to achieve optimum performance in dynamic range and maximum sustain.  Under this patent, the soundboard is gradually tapered from the center to the edge, permitting freedom of movement and creating a sound of unparalleled richness and sustain.

Created like the soundboard of violins to give a free and even response throughout the entire scale, the Model B design permits complete freedom of movement while displacing a greater amount of air, creating a richer and more lasting tonal response.

Close-grained, quarter-sawn Sitka spruce, which has exceptional stability and vibrance under stress and vibration, is used for the Model B soundboard.

Along with the Model D, the Model B features a single-piece bridge. The continuous “shepherd’s crook” bridge is a feature of only Models B and D.  It is one long continuous bridge from the highest treble to the deepest bass, enabling the instantaneous transfer of the vibrations of some 233 strings throughout the bridge and the soundboard, creating more color, more resonance, and more sustain.

Steinway constructs its soundboard bridges exclusively from vertically laminated hardwood with a horizontal grain, capped with solid maple. Each bridge is notched by hand for precise, individual string-bearing.

This design ensures optimal sound transmission from the strings to the soundboard, resulting in a sustained, resonant tone—creating the unique Steinway Sound.

In 1963, Steinway introduced the Hexagrip Pinblock, which is engineered to enable pianos to hold their tuning longer and with great precision.  The exclusive design provides the tuning pin with smoother movement under torque, a more uniform retaining action, and a piano that holds its tuning longer.

The Model B is the most aesthetically pleasing, non-concert Steinway. The curved 7’ sweep of the piano’s right side from front to back is more gracious and less stubby than a smaller baby grand.

The shape makes a more elegant statement and was in former days often referred to as the “parlor grand,” as it would grace the room reserved for conversation and the entertaining of guests in spacious homes.

The choice of most Steinway Artists

Most Steinway Artists own Model Bs or Model Ds–or both. The Model B is not too large for many living rooms yet is also large enough to be appropriate for a smaller concert hall or a church sanctuary.

It is the most versatile of the 5 smaller grands by Steinway and is Steinway’s best-selling model.  It is often the choice of serious amateurs or professional pianists who do not have the budget or the room for a 9’ concert grand Model D.

Having sold over 150 million records, Steinway Artist Billy Joel ranks as one of the most respected entertainers and recording artists in the world. In an interview on Steinway’s website, Joel attributes his early curiosity in the piano to Steinway’s Model B.

“The piano teacher that my mom took me to had a Steinway,” Joel explains.  “It was a Steinway B, the Model B grand — and it was so much better than the piano that we had in our house. I used to love to go to her house to play her piano, not because I liked taking lessons [laughs], because I just loved the sound of the piano that she had. It was set up in a studio and the acoustics were fairly ambient and that piano…

“I used to try to get her to… ‘Can we lift the lid up on the piano?’ Because I wanted it louder. Sometimes she would and sometimes she wouldn’t, but that was my first exposure to a Steinway. I was about five years old.”

Classical pianist and Steinway Artist Lang Lang was involved in the design of the Black Diamond Steinway grands, most of which are Model Bs.   That’s not by accident.  Steinway trusted the launch of this new line to the Model B, its all-time best-selling grand pianos. Every Black Diamond includes Steinway & Sons Spirio – r.

Another superstar, singer Lenny Kravitz, has also joined creative forces with Steinway, creating his own Limited Edition Model B series.

How Much Does the Steinway Model B Cost?

The Model B is one of the least expensive high-end pianos, starting at $124,900.

Compared to the price of other longer Steinway models and comparable models in other high-end brands, the Model B is seen by many as the best investment in the Steinway line.

This is a grand piano for customers who want the best and will sacrifice to own it.  The Model B is not for those buyers who want to save money by buying a used Steinway, nor for those without a space in their home at least 9’ long for a piano and bench.

Model B Spirios are available

The Model B is available as a Steinway Spirio, Steinway & Son’s cutting-edge player piano with a 4,300+ piece musical library of Steinway Artist performances and the Spirio| r – with the ability to record, archive, and edits performances in high resolution.

Many believe that the Model B is Steinway’s best piano–and that includes professional pianists.   Again, the Model B may not be the ideal piano for someone who needs to buy a lower-budget piano or who simply doesn’t have the space to accommodate a nearly 7’ grand.

However, for the professional or the serious amateur who wants a piano to challenge them and bring out their best as a musician, the Model B has earned its popularity and acclaim.  Some piano critics go so far as to say that the Model B is the “perfect piano.”

Larry Fine, a leading piano consultant and author of The Piano Book, writes, “The Model B is my favorite of the…Steinways and the best choice for the serious pianist, recording or teaching studio, or small recital hall.”

Come see if you agree.  Play a Model B and listen for yourself.  M. Steinert & Sons has piano consultants who can help you explore the nuances and the power of the Model B, including its Spirio versions.   A piano this legendary needs to be fully experienced.

Meanwhile, click on the links below at some of our other articles about Steinway pianos.